Surprise! I wasn't expecting to write another post here, either, but I thought it'd be better to place this post here instead of on my main blog. Think of it as an epilogue: I was finally able to do the thing I'd wanted to do three weeks earlier.

I took a bus out to the Andong Dam again to see if I could get to the top of the dam this time. Once I got to Andong Bus Terminal, I jumped into a cab, which took me the remainder of the way across town. I asked the cabbie to let me off at the Andong Dam Bike Path Certification Center, which happens to be right next to the Weolyeong-gyo, the Moonlight Bridge that featured so prominently in my Andong Dam excursion post. I paid more attention during the taxi ride across town this time, and it was disappointing to see that, while Andong has some truly gorgeous areas, it also has some ugly, citified areas as well. The urban section we drove through was drab and a bit depressing—quite unlike the bright, happy areas next to the Nakdong River.

The express bus from Seoul to Andong left at 6:50 a.m. and arrived at Andong Terminal at close to 9:50 a.m.—a nearly three-hour ride. I slept on the bus, so I was a bit bleary when I stepped off, but I was coherent enough to get into a cab and tell the cabbie where I needed to go. The Moonlight Bridge was there to greet me:

Since the northern approach to the dam was a bust last time, I decided to approach from the south this time. Instead of heading up a combination of stairs and trail, I instead had to trudge up a steep sidewalk next to a road. I had to laugh at how easy it is to detrain after a month of walking. I've been trying to stay off my feet in the weeks since I finished the Jeju/Andong trip, so my lung capacity is now all shot. I heaved and sweated my way up the hillside, and I'm ashamed to admit that I did have to stop a few times to catch my breath. As I've said elsewhere, fitness is a hamster wheel that you can never leave: if you do leave it, you detrain right away. Just maintaining a certain level of fitness means having the drive to do at least as much as you did the previous day—and that has to be true every day. So I was definitely feeling the effects of leaving the hamster wheel. Ugh. Look at that damn hill: 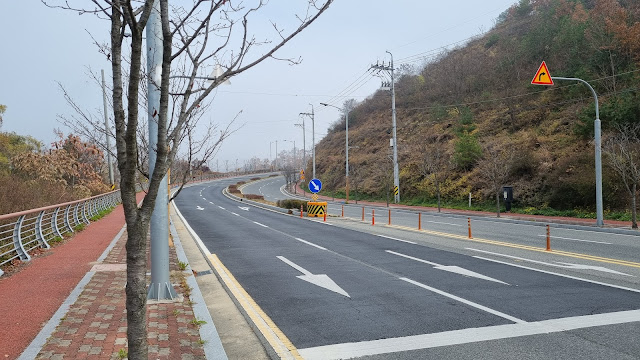 But, partway up the hill, I was rewarded with this impressive sight: 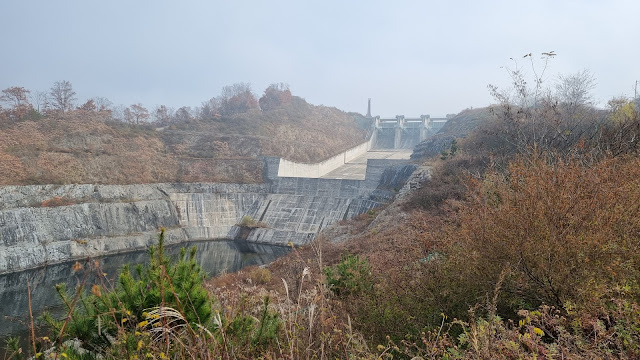 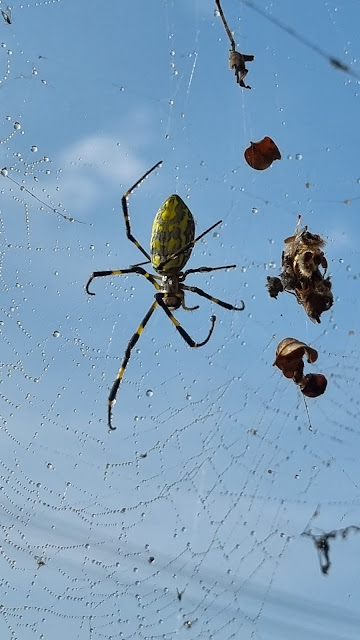 By this point, I'm at the top of that hill. In the pic below is a banner for some sort of calligraphy exhibition. Far off in that direction, visible in the distance, is a glass-walled café that eventually became one of my post-dam destinations. More on that in a bit.

By the time I reached the hilltop, I was technically past the dam. I had to duck onto a side road that took me back toward the dam and the south gate. Would the gate be open or closed?


So the gate turned out to be open! I was relieved and delighted. 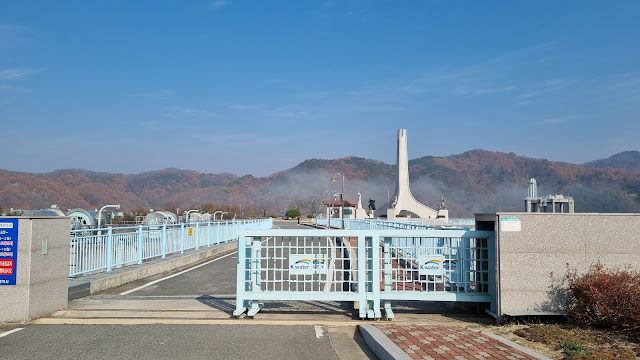 The sign below may explain what happened last time, i.e., when I saw the lone dude walking the dam while I was prevented from doing the same by a locked gate. This is only a guess, but I think that the dude I saw last time was some sort of staffer, not a tourist or hiker. I also looked back at the pictures from my previous trip to the dam, and the time stamps said I was at the dam's top by about 8:50 a.m. The sign below says that the dam's top is open to tourists starting at 10 a.m. This is why I think the dude I saw was a staffer: only a worker could be on that stretch at 8:50 a.m. Today, though, I arrived in Andong at close to 10 a.m., and it was nearly 11 a.m. by the time I reached this point. So the dam had been open to tourists for about an hour. Upshot: last time, I'd arrived too early. That's my theory, anyway. 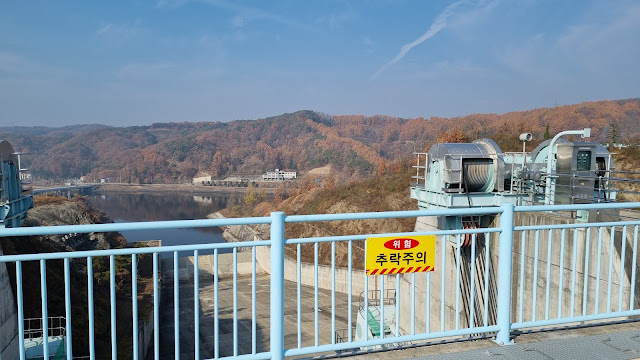 You really need to look at these pictures full-size to understand how huge all of this was. Gave me the willies, as if I were standing atop an Olympic ski jump. 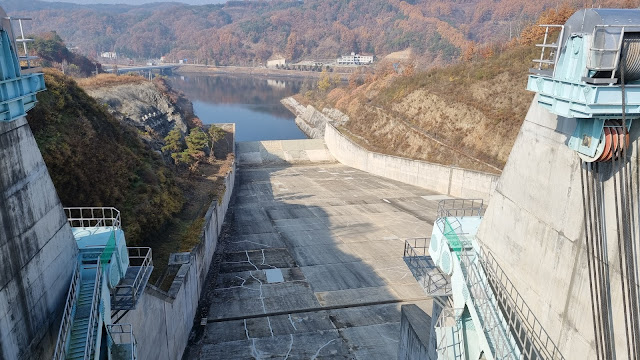 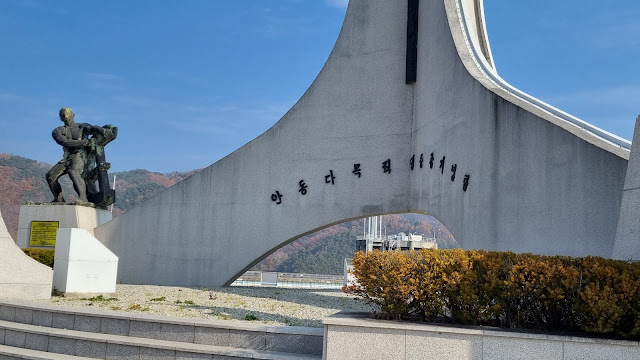 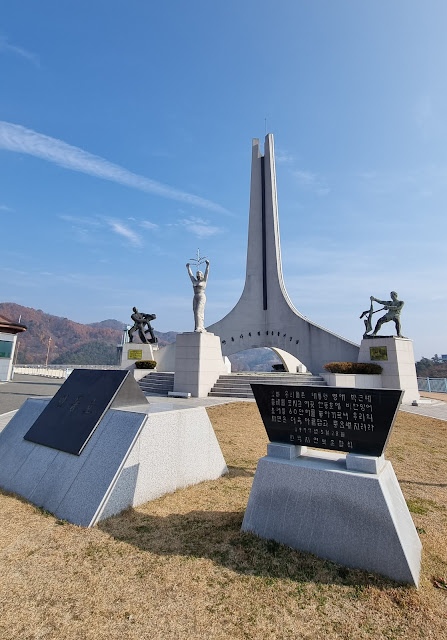 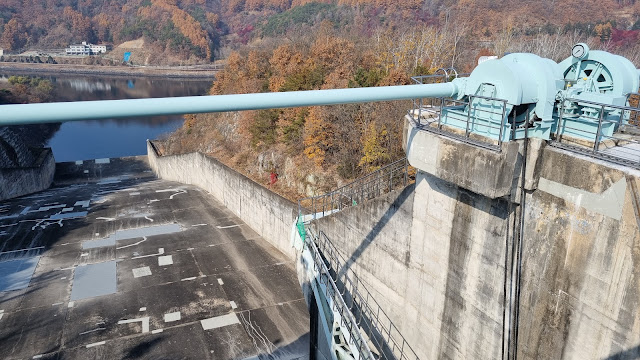 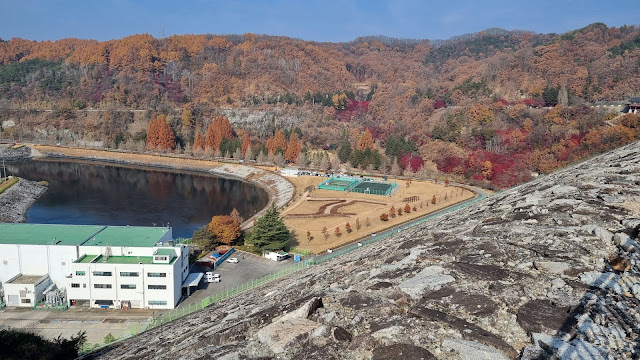 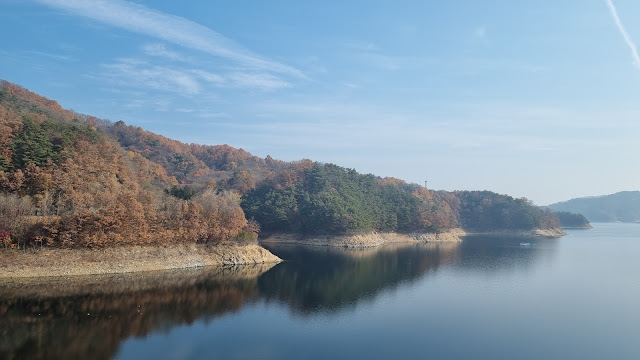 It was right about this moment when I really noticed the bare, exposed earth beneath the treeline, and it occurred to me that this meant the lake's water was low—maybe by 5-8 meters. 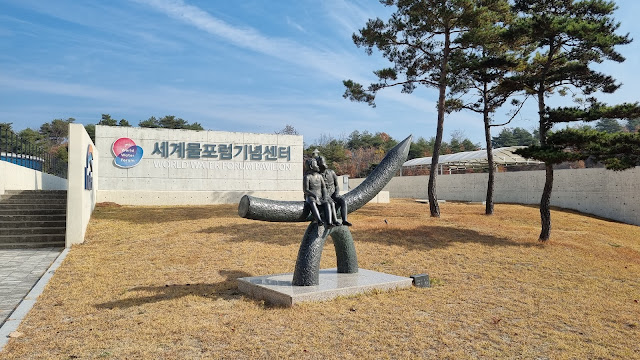 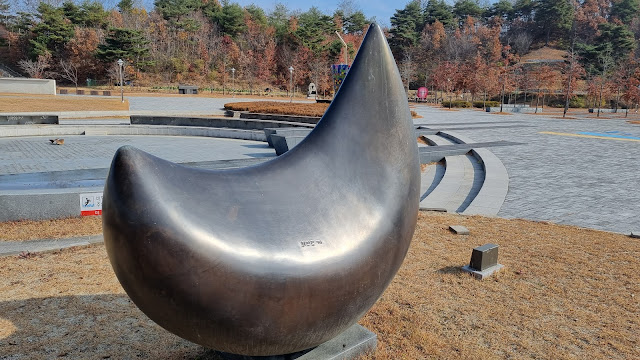 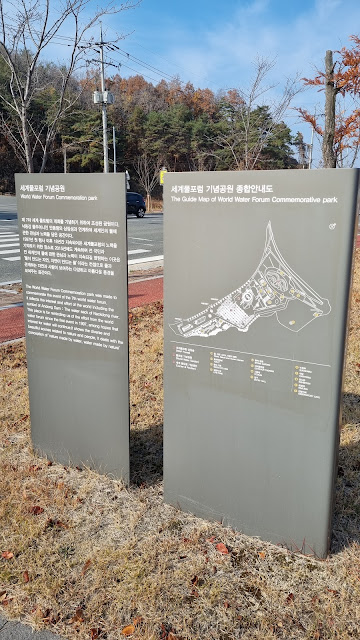 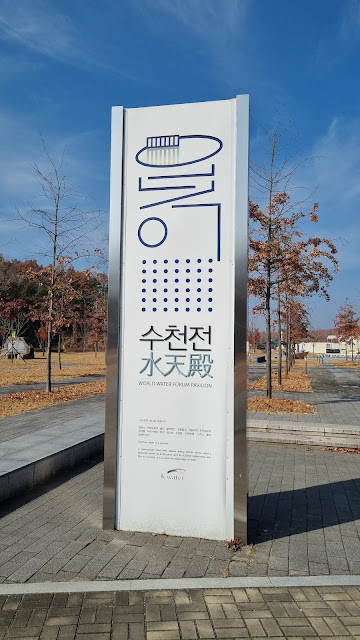 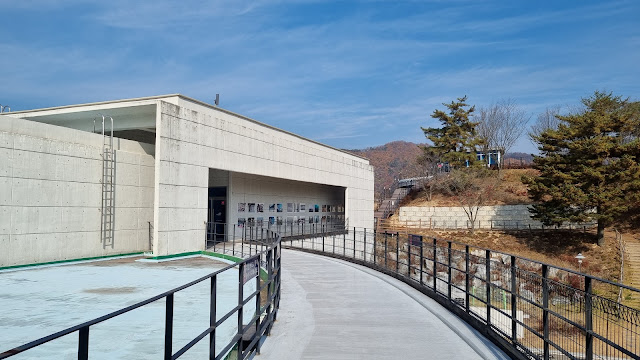 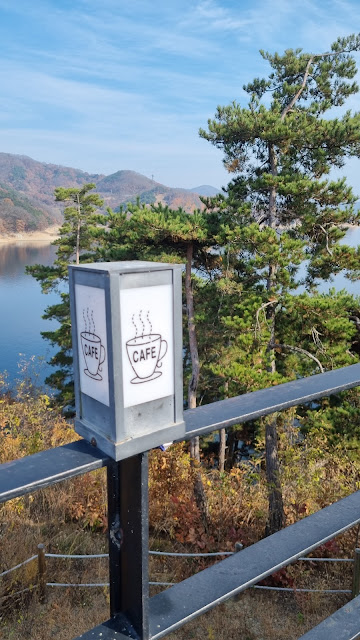 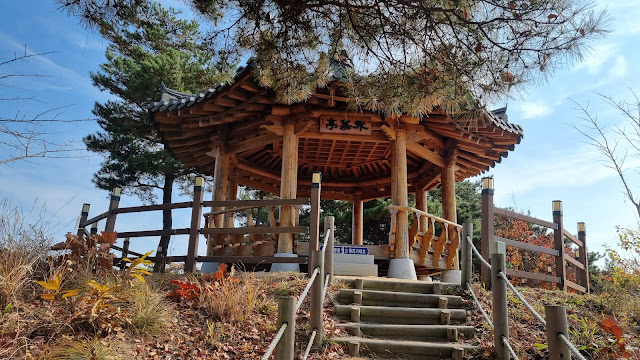 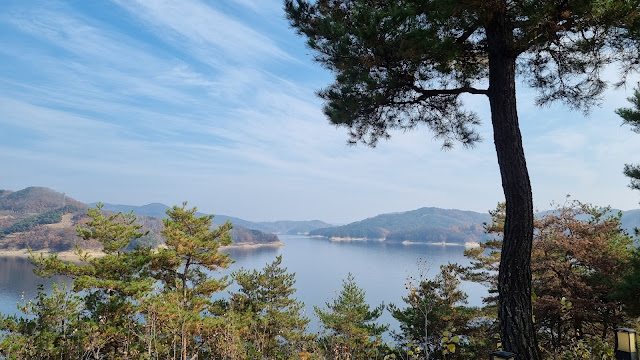 So I walked back down and considered myself mostly done with photographing for the day. I descended the same way I came up. This presented me with a dilemma because, as I went down, I saw a huge sign for a place called Goshen Pizzeria (Gojen Pijeria/고젠피제리아), and damn did I suddenly want a pizza. But I knew I'd be eating dinner at my place, and I didn't want to have an intestinal crisis while on the bus, so I fought down the urge to storm the pizzeria and demand a gigantic pie for myself. Back at the river's edge again, I took another photo of that little monument saying the motherland's future is the responsibility of its children: 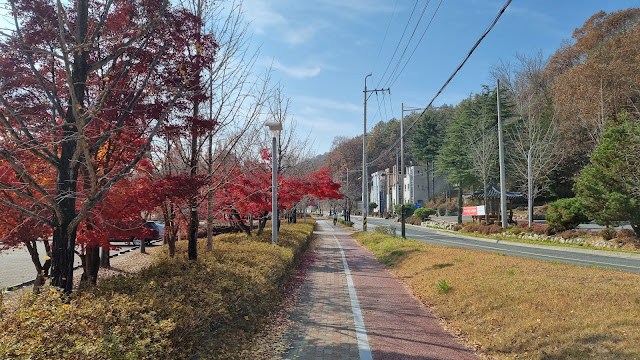 While corny, it seems fitting to end my photo essay on this note: 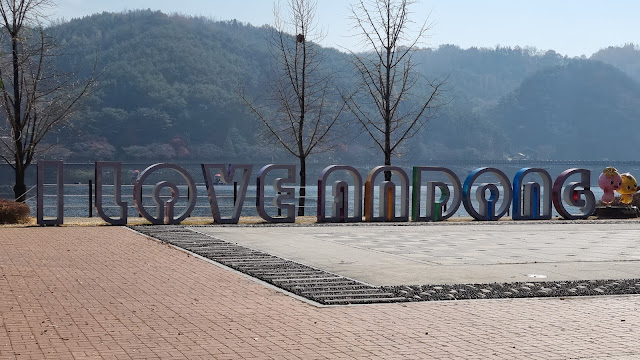 I didn't take any photos during that disappointing taxi ride through the parts of Andong City that lay between the bus terminal and the river. But despite that urban ugliness, I still feel Andong, taken as a whole, has a lot to offer. It's got incredibly huge riverside parklands as well as urban areas that are obviously well planned out, spic and span, and begging to be explored. So I'll be back—again and again, even if I find the local accent fucking annoying. I'm glad I was able to visit the dam the way I'd wanted to last time; I'm happy I took a bunch of photos, and I can only hope I've managed to convey at least a fraction of how lovely this region is. There's plenty more to do and see in Andong—food to eat, museums to take in, and events to experience. It's nice to know the place is only a bus ride away.

Kevin Kim
I hide in God's nostril and await the sneeze that will set me soaring. The unwise, meanwhile, wedge themselves between God's buttocks, expecting a similar wind.

The 2008 blog was about an attempt to walk across the US mainland, back when I knew nothing about distance walking. My mom got brain cancer while I was home convalescing from an injury, so that blog became the story of our family's painful journey through glioblastoma multiforme (GBM), the most common and aggressive form of brain cancer. Suffice it to say that the 2008 blog is a very different animal from the other blogs shown above.